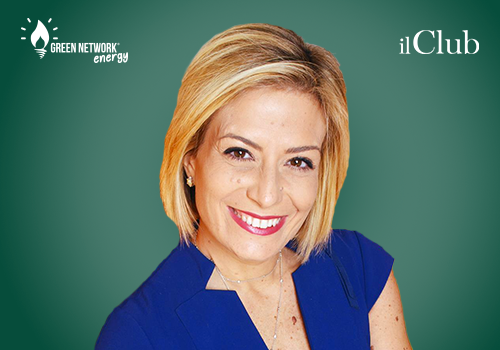 Sabrina Corbo, Executive Vice-President, welcomed Il Club Magazine into the offices of Green Network Energy. Sabrina Corbo is a member of the Steering Committee of the quarterly, bilingual magazine, produced exclusively in a paper version and distributed to subscribers only.

The message conveyed by the magazine is meaningful: the United Kingdom and Italy share a truly special relationship. As the historian Amedeo Quondam wrote, Italy has been the land of dreams in the British imagination, an inspiration for its writers and poets.

In the following interview, Il Club Magazine recounts Sabrina Corbo: a woman at the head of a large company, balancing business and family.

We start by asking what drove her to bring Christopher Wren and Michelangelo together, to do business in Britain, after many years operating as an energy supplier in Italy.

“The United Kingdom liberalised the electricity and gas energy sector ten years before Italy did. So it’s ten years ahead. Thanks to a clearly political decision made by Ofgem, the energy authority, the market is competitive, perhaps more complicated, but much more open to competition than it is in Italy. Competition is genuine, as is typically the case in the British market. As soon as I arrived, I studied the rules for energy suppliers, which are more complex than they are in Italy. For example, here even the licence is regulated. Whereas in Italy self-certification is accepted, here there is a process lasting from 9 to 12 months to be allowed to provide energy, which obviously involves significant operations and investments, and which ends with the authority auditing the company. But it doesn’t end there, because after the audit, there is a testing period of around three months, during which you are inspected. After that, depending on whether the authority is satisfied, the licence may be issued. Even after the licence has been granted, the inspections continue and in some cases licences have been withdrawn. Therefore, the procedure is more complicated, but also more rigorous, if I may say so.”

“I welcome rules, provided they are fixed and applicable to everyone, that they demonstrate to the public that the sector is made up not only of the energy giants and that the market is open, so the customer can benefit and save money. We made a large investment and nine months on from the first switch (which was at my house in November 2016), we already have 150,000 customers. I experienced that sense of satisfaction in Italy when my house and office were switched over, but I didn’t think I would ever have the same opportunity in another country. On 1 November 2017, we started supplying SMEs and from next January, we will be supplying industry as a whole. In Italy, we did the opposite: we supplied only businesses for the first ten years and then the domestic market. We will be among the few independent suppliers that supply all three sectors. So we are expanding and I’m very happy, because we are exceeding the forecasts made in our business plan. I’m also happy with the decision we made, even though logistically complicated, and with my family.”

Let’s talk about the city in which you live. Is there a place in the English capital that you find magical?

“A bench in Hyde Park, where, sitting with my husband and surrounded by my two golden retrievers, we decided to take on this adventure in Britain. I took out a scrap of paper with some figures. My husband looked at them and asked me, “But why didn’t we do it sooner?” Then we had to tell our children, aged eight, seven and five. Once we received their approval, we didn’t hesitate.”