Sòlergys, a Green Network Group company, has developed a totally integrated photovoltaic car park of a peak capacity of 1352.4 kWp in the Industrial District of Catania, in Sicily, in an area adjacent to the STMicroelectronics plant.

The development of the photovoltaic car park was authorised by the Region of Sicily (Regional Department of Energy and Public Services) with Single Authorisation.

This is one of the biggest projects of its kind in terms of installed capacity and, in addition to the reclamation of the land adjacent to the plant, also made it possible to develop open-air and covered parking spaces for the exclusive use of STMicroelectronics personnel.

Plywood was used to construct the photovoltaic car park making the structure particularly stylish from an architectural perspective as well as environmentally friendly. The panels were erected on top of the plywood shelters to cover the parking spaces.

The photovoltaic car park area is completely paved with a system for the collection and drainage of rainwater, complete with vertical and horizontal signage surrounded, at the external perimeter, by indigenous plants of the Cupressus genus and a related irrigation system.

A fire prevention system, connected to the fire prevention network of the STM plant, has also been designed. The installation will produce approx. 2,050,089.70 kWh/year, enough energy to meet the needs of around 845 domestic users with an annual estimated consumption of 2425 kWh per user (Catania area).

As the photovoltaic car park is connected to the building’s internal medium voltage network, all of the energy produced from this renewable source will be completely used up by STMicroelectronics. The generated energy is incentivised by GSE through the II Conto Energia. 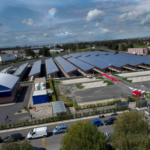