Green Network participates in the presentation of a new book: “The Italian Embassy in London” 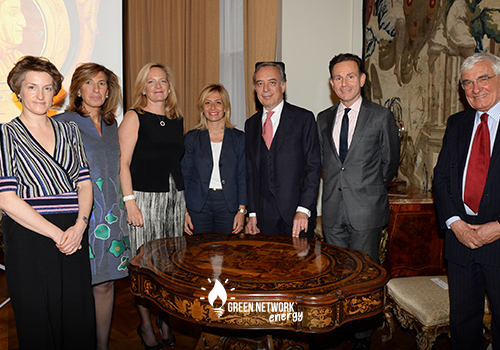 A publication about the diplomatic, artistic and architectural history of the Italian Embassy in London, presented together with experts from Sotheby’s and the Allemandi publishing house.A new book, “The Italian Embassy in London” (in Italian: “L’Ambasciata d’Italia a Londra”), published by the Umberto Allemandi publishing house in collaboration with Sotheby’s, was launched this evening. It explores the recent history of the diplomatic mission, starting from when it took up residence in its current seat at 4, Grosvenor Square. The volume, published both in Italian and in English, includes sections dedicated to the art collection, to the history of the building’s architecture and to the history of bilateral relations from 1932 to the present day.

Ambassador Pasquale Terracciano, who launched the idea for the project together with his wife, Karen Lawrence Terracciano, reminded the guests present at the event, mostly art lovers and representatives of the world of culture, of what inspired the new volume – the opportunity to reconstruct, in collaboration with a team of experts, the historical and cultural legacy of the Embassy, in terms of its diplomatic and architectural history and of the artistic heritage preserved there since the first half of the twentieth century. In his opening speech, the Ambassador also offered some historical background, elaborated on in the preface by Sergio Romano.

Ambassador Terracciano then emphasised the importance of valorising the collection, for “it speaks of our roots, but also confers prestige on the present and helps extend Italian soft power in the UK, which is no small advantage in the current historical conjuncture”.

A concrete example of the impact of soft power, he added, was the return of the Venus attributed to Botticelli and his workshop, and once part of the Embassy’s collection (1934-1940), to the United Kingdom a year ago – for the first time in more than 7 decades – when it was loaned by the Sabauda Gallery in Turin to the Victoria and Albert Museum for the Botticelli Reimagined exhibition, where it was one of the works that raised most public interest.

The Ambassador’s speech was followed by that of Dr. Umberto Allemandi, president of the same publishing company that published the book, who recalled the salient moments of the project and of the collaboration with the Embassy and the Sotheby’s experts.

The volume, made possible by the fundamental contributions of Green Network Energy and Intesa Sanpaolo, is rich in textual and photographic content and notable for its detailed analysis of the art collection – fruit of painstaking and rigorous historical and artistic research into the main works, curated by numerous Sotheby’s experts, led by Mario Tavella, Chairman Europe of the celebrated auction house and Maria Sancho-Arroyo Puliti, Director at Sotheby’s. The architectural history of the building in relation to the district of Mayfair is the work of Michael Hall, the noted architectural historian, while the photographs, in particular those of the rooms, are by the famous photographer Massimo Listri, who has already collaborated on photographic books about the art and architecture of numerous Italian government buildings.

Dr. Tavella concluded the book presentation by analysing a selection of the most important works in the Embassy’s collection, providing details about the research the project entailed and about a number of original discoveries which emerged incidentally from consulting documents held in the Historical and Diplomatic Archives of the Italian Ministry of Foreign Affairs.

To celebrate the event,  copies of a limited print run of the book were on sale, and the proceeds will go to the Scuola Italiana a Londra (SIAL).