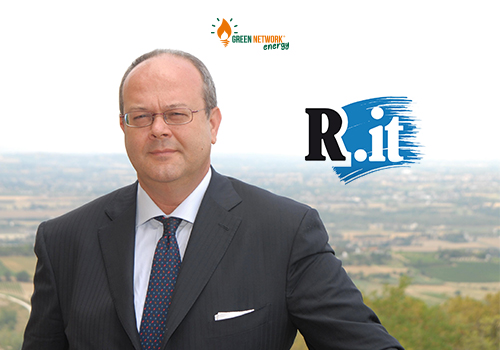 The energy and gas world is buzzing. In Italy, a year has elapsed after the compulsory transition to the free market, with the abolition of the safeguard mechanism. People who were under the mechanism established by the Italian regulator, Electricity, Gas and Water Authority (ARERA) had no choice other than a tariff with pre-set maximum energy prices and contract terms.

Operators are elbowing to earn additional market share through increasingly competitive rates. At stake, there are over 31 million potential customers who are currently were previously part of the safeguard mechanism and have not switched, (just one in three has moved to the electricity free market, and one in five in gas). It is a very delicate and diverse range of customers, largely made up of poorly informed people with little knowledge of the industry and many of whom are elderly.

Amidst these changes, Green Network, a company founded in 2003 by Piero Saulli, a former Enel manager, and his wife Sabrina Corbo, originated and now operates. The company immediately tried to stand out by diversifying its business twofold. Firstly, it focussed on building a highly loyal retail base (now representing 85% of the business, with the remaining 15% represented by large industrial customers). Next, it accelerated internationalization with an important project in Britain (operational since September 2016).

“Today we have 300,000 customers who have decided to take up our offer”, says the General Director of the group, Giovanni Barberis, former CFO of Acea and Hera, with a consolidated experience in the field. “The goal is to reach one million customers by 2017, that we expect to win over on the retail market thanks to new opportunities.” A goal which until yesterday (dd/mm/yy) was envisaged for 2018, but has been brought forward by a year, because of the company’s rapid expansion. Some key figures: in 2015, the results closed with an increase in pre-tax profit to € 4.3 million (€ 1.2 million at 2014-end), and in operating profit to € 8.6 million (€ 3.5 million at 2014-end).

Revenues, which slightly exceeded € 1 billion, were however less than those recorded in 2014 (€ 1.4 billion). A further contraction is expected in 2016 estimated at € 806 million, forecast to increase again in 2017. Barberis explains: “The drop has stemmed from a higher focus on sales, to the detriment of production and trading, where margins are too tight. The increased focus on sales was also a result of a purge of our third party agencies resulting in 80% being removed, keeping only the most reliable and transparent and contracting with new ones who meet our criteria”.

“When we exceed € 100 million in gross profits, we will be ready to enter the Milan Stock Market, in the star segment,” says Barberis. A target that, anyway, he does not envisage prior to 2018. Lurking around the corner, meanwhile, is another challenge: the GB market. “We launched in  October, first addressing the many Italians in the UK (estimated to be over 500,000 with tax status and about 1 million residents). We became the first Italian operator to enter the UK energy and gas market. The goal is to acquire 100,000 loyal customers a year, “signs off Barberis.