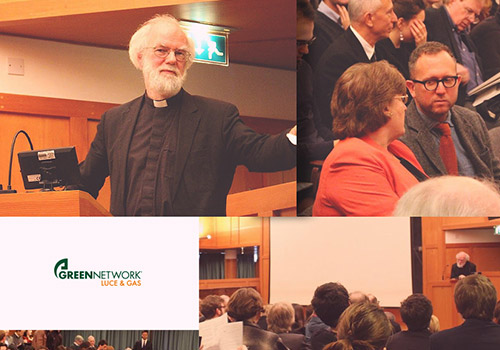 Former Archbishop of Canterbury Rowan Williams has rounded off a four-year project at Cambridge University which explored the “vertical” connections across Dante’s Comedy.

Over the past four years, the University of Cambridge has brought together experts on Dante from across the UK and abroad to re-examine Dante’s masterpiece “The Divine Comedy” in a bold new way, looking at the “vertical” connections between the Inferno, Purgatorio, and Paradiso.

The project marks the first time that a “vertical” reading has been systematically applied to Dante’s entire work as a whole. Scholars from around the world came to Cambridge to explore how the same-numbered cantos from all three canticles relate to each other, and what new light these connections can shed on Dante’s artistic and conceptual modes throughout the poem.

The final lecture of the series was presented by the former Archbishop of Canterbury, Professor Lord Rowan Williams. His lecture is available to view online via the University Streaming Media Service, along with all others in the series, called Cambridge Vertical Readings in Dante’s Comedy. This series was organized by Dr. George Corbett and Dr. Heather Webb as an initiative of the Department of Italian at Cambridge University.

Dr. Webb, a professor of Italian at the University of Cambridge, said: “looking at Dante through a vertical reading is a way of starting over and exploring the poem afresh.”

Cambridge Vertical Readings in Dante’s Comedy is also available in traditional and e-book formats, and is also freely available to read online. The collection offers an unprecedented repertoire of vertical readings for the entire Divine Comedy, which not only articulates unexamined connections between the three canticles but also unlocks new ways to enter into the core themes of the poem.

“Open Book Publishers have made it so that anyone can go online and read the whole collection, which is really exciting for everyone involved in the project,” said Dr. Webb. “We want students and enthusiasts at every level to be able to access this new approach to looking at Dante and for us to share the results that everyone who has worked on these readings have brought together have brought together over the last four years.”

Green Network has a strong bond with the artistic and literary universe, and as an evidence of that, Sabrina Corbo, vice-president of the Group, distinguished herself among the leading personalities of the event.